Una Watters’ niece, Sheila Smith and her daughter Karen, write about the background to one of Una’s large, late-career portraits which demonstrates her unusual textured approach to portraiture.

One of Una Watters’ strengths was portraiture as evidenced by the sheer number of pencil sketches and drawings of family and friends in her portfolio of work. Subjects frequently testify to the great likeness that Una achieved in these works. Late in her career, she also completed several portraits in oil, which featured in the 1966 retrospective exhibition, including one of her husband, E R Watters (1965), another of Tomás O’Muircheartaigh (1962), which we have still not managed to trace, and a portrait of Brian O’Higgins (1963).

The O’Higgins portrait (oil on canvas, dimensions unknown) was completed after the subject’s death. There was a family and professional relationship with Una Watters as O’Higgins had commissioned artistic work from her and was also her uncle. (His wife, and Una’s mother, were sisters.)

Brian O’Higgins (1882–1963) was a distinguished Irish language poet, soldier and patriot. He was a travelling teacher with the Gaelic League and a founder member of the Irish Volunteers.  He took part in the 1916 Easter Rising and was imprisoned in Frongoch in Wales, one of several imprisonments he endured. While in prison, he wrote extensively – prayers, spiritual pieces and poetry. Sometimes known by his pen name, Brian na Banban he also composed both inspirational verse and marching songs, such as “Dawning of the Day”, “Eight Millions of Englishmen” and “Marching Song of Na Fianna Eireann”.

In testimony to the Bureau of Military History, Sean Prendergast, an army captain whom he fought with in 1916, said O’Higgins’ verses and songs “had stirred us to such depths during the past number of years. Few men could be so sincere and so true than he”. Most famous of his songs is undoubtedly “A Stóir mo Chrói” (Treasure of my Heart), a haunting ballad which is still covered by contemporary singers such as  Maura O’Connell, Bonnie Raitt and The Chieftains.

In 1924 O’Higgins set up a publishing house which printed devotional and patriotic booklets with rallying titles such as Unconquered Ireland (1927)and featuring beautifully decorated covers with stylised Celtic designs. He also published and edited the Wolfe Tone Annual between 1932-62. From the 1950s, Brian and his son, Criodán, extended their range into Irish Christmas cards, again utilising Celtic calligraphy and featuring verses written by Brian. The cards were sent all over the world and were particularly popular in the US.

When they needed another illustrator, Una’s sister, Sheila – mother of Sheila Smith, one of the authors of this article – suggested Una since by this stage she was an accomplished artist. As well as the Christmas cards, Una also illustrated a number of devotional pamphlets produced by the company including Little Book of St Patrick (1957), Little Book of St Francis (1958), Little Book of Exile (1959) and the Little Book of Memories (1960) – see first two images below.

Although Una was keen to paint her uncle, she didn’t manage to do so before his death.  She executed the portrait using photographs and her personal recollection of him, according to an article in the Irish Independent on June 2, 1964. “All who have seen it have acknowledged that the attitude is typical of the man they had known in his many moods. Certainly, in painting it, Mrs. Watters has treated her deceased subject with great sympathy and affection.”

It is a large work and done in the angular style Una favoured, especially so in the rendering of the domed head. O’Higgins is looking directly out of the frame, which engages the viewer immediately. His tweed jacket looks almost tactile – the design of the cloth stands out from the painting.

The portrait is one of only three of Una’s works on public display.  The others are The People’s Gardens in the Hugh Lane Gallery Hugh Lane Gallery (see Logan Sisley’s blog of May 6 on this site) and The Four Masters in Phibsboro Library.

The O’Higgins portrait hangs in the Local Studies Room in Navan Library It was presented to the library by the O’Higgins family, having previously hung in the offices of the publishing house on O’Connell Street.  When the libraries reopen after the COVID-19 crisis, it will be possible to view the painting in situ. However, as it is not in the main library, a call in advance is advisable. (046) 9021134 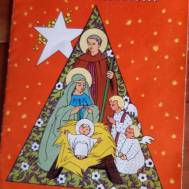 Mary Morrissy curates this site. She is an award-winning novelist, short story writer and journalist. She has taught creative writing at university level in the US and Ireland for the past 20 years, and is also an individual literary mentor.

One reply on “Portrait of Brian O’Higgins”

Reblogged this on mary morrissy and commented: